Our Deen is perfectly designed to guide and strengthen us as brotherhood. Our Prophet (May Allah’s Peace and blessings be upon him) was indeed the best role model to emulate. He left us with all that we need to be human and thrive in this life.

Although life is busy, and we seem to forget or neglect some of his teachings. Unfortunately, this negligence does more harm than good to this Ummah . Now we seem to learn from outside of our Deen. Empathy which is now being talked about as one of the necessities to cultivate mutual love and understanding among communities has always been the way of the noble messenger. He was indeed a great leader and the best of mankind. Ironically, many Muslims of today do not understand this phenomenon, and remaining few that do either do not practice it well, or never try all.

Sympathy is trying to understand where someone is coming from but not helping them to get where they’re going. Empathy on the other hand is to acknowledge and feel someone else’s pain while striving with them to help mitigate it. Empathy at its foundation includes curiosity and it is the bane of successful leadership. It is creating a safe space for people at their times of need. This means seeing people as humans and being able to support them. It encapsulates the ability to see and hear the pain of others as if you’re feeling it, then doing something about it to salvage the situation. A true Muslim is one who practices empathy with sincerity. Without empathy, your belief in Allah is faulty. Empathy is a sign of brotherhood and could be found in the golden rule of Islam as depicted in this hadith: 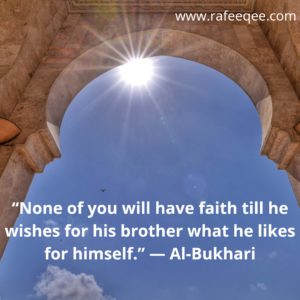 1. Ikrima after the conquest of Mecca: Ikrima was the son of Abu Jahl. A fierce enemy of the prophet and one of the greatest haters of the Muslims. He disliked the Prophet to a point that he wanted to kill him. Ikrima also supported his father on this quest while he was alive. After the conquest of Mecca, Allah guided Ikrima’s heart to Islam. When the prophet noticed that Ikrima was heading towards him, he told his companions: Ikrima is coming and I’m hoping that he becomes a Muslim. In his presence, do not refer to his father as Abu Jahl as it will hurt his feelings. Even if he becomes a Muslim, it will still hurt him to know that his father who was perceived to be a wise man, is being mocked as the father of ignorance. This is the graciousness of Allah’s Apostle, the sincerest show of empathy to someone who wanted you dead.

2. Jabir ibn Abdullah after the battle of Uhud: The battle of Uhud was one of the toughest in the lifetime of the prophet. He lost a lot of companions amongst which was Hamza, his uncle. Jabir’s father – Abdullah, while going on the expedition had entrusted Jabir to 7 of his daughters who were his younger sisters. His father was also one of the martyrs of Uhud, hence leaving Jabir with a huge responsibility to cater for the needs of his sisters. One day, he saw Jabir riding on a nice animal and then told him he liked his animal. Jabir said he was going to offer it to Allah’s Apostle as a gift. The prophet said no way; he was going to buy it and asked Jabir to name a price. Jabir said to him: one dirham. The prophet gave him 400 dirhams for his animal. After the transaction was completed, the prophet asked someone else to take back the animal to Jabir. He knew Jabir was so humble and bashful that he might not want to accept the money if he offered it to him directly. This was how he supported a young man financially after losing his father and yet showing empathy towards Jabir.

3. Abdullah bn Ubay and his son’s intercession: Abdullah bin Ubay bin Salul was the chief of the hypocrites in Madinah. In fact, due to what the organization of mischief that he led did, many verses and even a complete chapter called “al-Munafiqun” were sent down. After his death, his son approached the Messenger of Allah saying: “my father has died, and I know that he was completely opposed to you. He said terrible reprehensible things about you, but he’s my father and I worry about him”. The prophet on the spot, took off his shirt and gave it to him to use as a shroud to wrap the remains of his father. Again, the Messenger showed empathy and compassion in a beautiful manner.

4. Al-Husayn ibn Ali – the stuttering boy: Husayn was the younger grandson of the prophet from Fatimah and Ali. He stuttered severely, such that it was hard for him to complete a sentence. His elder brother Al-Hassan was very eloquent and intelligent, so this was a bit disturbing. One day the prophet was with his companions and his grandkids were with him. So Husayn was trying to speak, and the prophet paid attention to him and everyone around kept on looking at Al-Husayn. The boy began to stutter, and people started feeling bad for him in an awkward manner. The prophet never stopped him, nor did he help him complete the statements. When he was done speaking, the prophet turned to his companions and told them: he inherited this from his uncle Musa(AS). This literally means do not feel bad for him, he got it from a great man. Allah’s Apostle turned a situation which we will otherwise see as negativity into a positive one. That’s a show of love and empathy.

5. A father and mother to the son of Basheer: This is a very touching story. Bashir was an Ansari companion who went on an expedition. This time, Allah’s Apostle peace be upon him did not go with them. So, on returning to Madinah, it was the practice of the prophet to go and welcome back the returnees. Everyone comes out in hope of seeing their fathers, brothers, and uncles. The prophet was behind everyone as they walked back into the city. He saw the son of Basheer standing, looking for his dad. He asked everyone, have you seen my dad? Unfortunately, no one gave an affirmative response. Then he saw the prophet coming alone at the end of the crowd. He began to weep knowing he wouldn’t be seeing his father anymore after becoming a martyr. The prophet stopped and hugged him until he stopped weeping. Then he told him: if you need a father, I will be your father and Aisha will be your mother. This is empathy at its peak, embracing another person’s child as your own.

To make a difference in our society, there is a need go back to our origin, and strive as much as possible to practice the ways of our predecessors. You can practice EMPATHY and be more empathetic towards others by cultivating these five simple actions:

• Listening:- Patiently listen attentively when others are expressing themself.

• Non-judgmental:- Don’t listen to judge others, rather listen to help them.

• Understanding:- Be discerning towards others and try to get where they’re coming from.

• Imagination:- Put yourself in another person’s place, in order to feel how they’re feeling.

• Response:- This is the crux of empathy. It is reacting appropriately to the problem. Even if you can’t provide a solution, say a kind word – that makes all the difference.

On a final note, being too empathetic at times make people want to take you for a ride. Be careful and investigate situations to the best way you can. Even if you try to help and they end up hurting you, do not be sad. Patiently wait for a day in which wealth and family will not be of merit. And then, Allah will give everyone the reward of their deeds in full measure. Remain kind, empathetic and stay blessed always.