Have we ever wondered why Allah’s beautiful names started with Mercy: Ar-Rahman (The Most Merciful) and Ar-Raheem (The Most Compassionate)? Also, have we really pondered on why Allah described how forgiving He is with His Four Beautiful names?

Al-Tawwab (The Accepter of Repentance)? 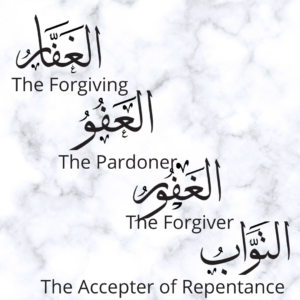 Have we ever reflected on Allah calling Himself Al-Quddus (The Holy One)?

All these names have purposes and significance. As Muslims, we must realize that Allah calls Himself “The Holy and Perfect Being” without flaws or weaknesses for us to embrace vulnerability. We have to admit we can never be perfect and are prone to making mistakes.

There are reasons Allah emphasized how Merciful and Forgiving He is so we can turn to Him always. He did not just say He is the forgiver only, but the Forgiving which indicates that no matter how much we sin, He is the one we should always turn to.

It is not a mistake that Allah also mentioned Forgiveness and Mercy 100 and 200 times respectively in the Holy Qur’an. Why do we then burden ourselves with worries rather than turn to Allah for repentance.

Allah says in His holy book:

“Shaytan promises you poverty and commands you to avarice. Allah promises you forgiveness from Him and abundance. Allah is All-Encompassing, All-Knowing.” [Al Baqarah : 268]

Allah has promised that no matter how plenty our sins are, He would forgive us as long as we seek forgiveness from Him. This is exemplified in an authentic tradition of Prophet Mohammad of Allah who said Allah revealed to him saying:

As humans, we do not only offend Allah sometimes, we also offend one another. It is apparently impossible to live life without offending people or someone offending us. A lot of times, they overlook our mistakes and tolerate us but we hold on to their flaws and fail to forgive them because we either feel they do not deserve our forgiveness or we are not patient enough.

What we fail to realize is that holding on to our pasts can be draining. It slows our pace and deprives us inner peace. It is like strapping a heavy load on our shoulder and carrying it all around us! It affects our physical and mental health which affects all spheres of our lives. As long as we hold on to people’s errors, our pains would continue to grow and hence we keep hurting ourselves.

But when we forgive, we build our self-esteem because it reflects how strong we are in letting go of bitterness in order to move forward. We embrace healing which would help us grow mentally as we get a good sleep and do away with stress and depression. No one is expecting us to pretend the wrong never happened. But holding on to it makes it hurt more. Why then shouldn’t we embrace forgiveness to live a healthy life?

The Beloved Prophet of Allah (Peace be upon Him) is a man who loves to forgive and enjoins his Ummah to do the same.

“Be merciful to others and you will receive mercy. Forgive others and Allah will forgive you” (Musnad Ahmad). 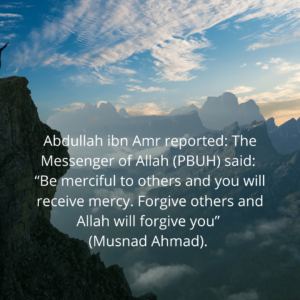 “The repayment of a bad action is one equivalent to it. But if someone pardons and puts things right, his reward is with Allah. Certainly, He does not love wrongdoers.” [Ash-Shuraa : 40]

May Allah forgive us all of our shortcomings.