All praise is due to Allah, we praise Him, seek His aid and His forgiveness. We seek refuge in Allah from the evils of our souls and the evils of our actions. Whomsoever Allah guides there is none to misguide and whomsoever Allah misguides there is none to guide. I bear witness that there is none worthy of worship except Allah, alone, without any partners and I bear witness that Muhammad is His servant and Messenger. With the fitnah afflicting our world, there is need to reconnect with the blessing that we Muslims have be granted from Allah’s Mercy. So many people are being misguided because of their lack of knowledge, and they seek help where they are not supposed.

Seeking cure or healing is one of the things that make people fall into disbelief, we pray to Allah against such test. Our Prophet, may Allah’s peace and blessings be upon him left us with a complete way of life, part of which is performing ruqyah.

Ruqyah refers to the healing method based on Quran and Sunnah, it involves seeking refuge in Allah, supplication to Him, and remembrance of Allah. This practice of treating illness through Quranic verses and invocations were prescribed by the Messenger of Allah, may Allah be Pleased with Him. It provides a cure for evil, sickness, magic, jinn, and madness.

Ruqyah is best done by a person for themselves by supplicating to Allah, trusting, and asking Him to cure as no one Cures except Him, remembrance, and glorifying Allah, and continuously asking for Allah to remove whatever afflicts you whether evil-eye, mental illness, diseases, jinn, and others, and most importantly by reciting Qur’an. In the recitation of Qur’an there is cure.

Doing this act on oneself has been said by scholars to be the best, and it is also said that it doesn’t prevent one from being among the 70,000 who would enter Jannah without being questioned, as you rely on Allah and seek His Help and Cure directly without intercession. Here are few ways to perform Ruqyah on yourself.

1. By spitting(blowing) into your hands after reciting Surah al-Ikhlas, surah an-Nas, and Surah al-Falaq into the hands, all cupped up.

According to a hadith reported by A-ishah (may Allah be Pleased with her) which said:

“Whenever the Prophet (ﷺ) went to bed each night, he used to cup his hands together, then blow into them then recite into them Surah Al-Ikhlās, Surah Al-Falaq and Surah An-Nās, and then wipe his hands over whatever parts of his body he was able to wipe, starting with his head, face and the front of his body. He used to do that three times.”[Bukhari, 5017]

2. Spitting or blowing on the place that hurts.

According to a narration,

“when Allah’s Prophet (may Allah’s peace and blessings be upon him) fell ill, he blew over his body by reciting surah Al-falaq and Surah an-Nas and wiped with his hands” It is also permitted to recite any Surah from the Qur’an because the Qur’an is cure according to Shaikh Ibn Baz(may Allah bless him). Allah says in surah Fussilat verse 44;

“say, It is, for those who believe, a guidance and cure.” Likewise in surah Al-Isra, Allah says,

“And We send down from the Qur’an that which is a healing and a mercy to those who believe.” {Al-Isra:82} 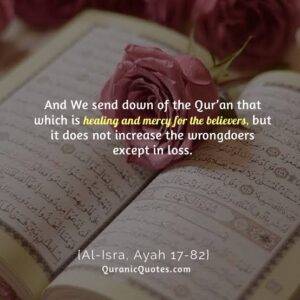 As stated by our mother A’ishah, may Allah be Pleased with her, “that when any of the members of the family of the Messenger of Allah fell ill he would blow over them and recite Surah Al-Falaq and Surah An-Nās. “And when he suffered from the illness of which he died I used to blow over him and wiped his body with his hand for his hand had a greater blessing of healing than my hand.”

3. Placing hand on the place you feel pain and make du’a.

There are some recorded sayings of the prophet in reference to this, Anas Ibn Mālik (may Allah be Pleased him) said that Allah’s Messenger (ﷺ) said, “When you suffer from some ailment, then place your hand at the place of the ailment, then say
[ بِسْمِ اللَّهِ أَعُوذُ بِعِزَّةِ اللَّهِ وَقُدْرَتِهِ مِنْ شَرِّ مَا أَجِدُ مِنْ وَجَعِي هَذَا]

Then lift your hand and repeat that an odd number of times.”The Prophet(ﷺ) also said, “Place your right hand on the place you feel the pain and wipe it seven times saying

There was also a recording from when Uthmān Ibn Abil-‘Ās Ath-Thaqafi (may Allahbe Pleased with him) complained to Allah’s Messenger (ﷺ) of a pain that he felt in his body from the time he had become Muslim. Thereupon Allah’s Messenger (ﷺ) said: “Place your hand at the place where you feel pain in your body and say: 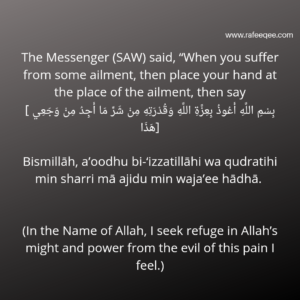 4. Recite Qur’an onto some water, blow into the water and then drink it and take bathe from it.

If one can recite into Zamzam water, then that is better due to the saying of the Prophet, “Indeed it is a blessed water, and a food that feeds, and a cure for illnesses.” He (ﷺ) said,

“The water of Zamzam is for whatever a person drinks it for.”[ibn Majah]. In a narration he said, “If you drink it, you will be cured by it, may Allah cure you.” It is reported from the Prophet, may Allah’s peace and blessings be upon him that, “He would carry Zamzam water in water containers and he would pour it over the sick and give it to them to drink.”[as-Saheehah, 883] And he said, “The best water on the face of the earth is Zamzam; it is a type of food and a healing from sickness.” Relief would be granted by Allah’s Permission. 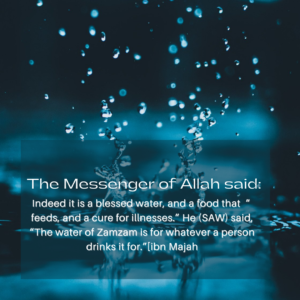 5. Reciting Qur’an over olive oil and rubbing it in the pain.

One can recite the Qur’an into olive oil and blow into it then use it to massage. As recorder in at-Tirmidhi; Allah’s Messenger(may Allah’s peace and blessings be upon him) stated, “Eat olives and use the oil (to anoint) for indeed it is a blessed tree.”[authenticated by Al-Albani]

While the above are few of many ways one can perform Ruqyah on oneself, one should note that Ruqyah can be performed without spitting. There are some narrations whereby the Messenger of Allah made supplications for people without blowing on them. According to a report from Also, Abu Sa’eed where he reported that Angel Jibreel came to Allah’s Messenger (ﷺ) and said, “Muhammad, have you fallen ill?” The Prophet said: “Yes.” So Jibreel said:

A’ishah also gave a narration in this regard, When any person amongst us fell ill, Allah’s Messenger (ﷺ) would recite:

(Remove the harm, O Lord of the people! Heal, for You are The Healer. There is no healing that avails except your healing. A healing that leaves behind no ailment)[Muslim 2191]

Below are some recorded parts of the Qur’an that can be recited regularly to seek divine cure and remedy from affliction.

There other supplications from books on invocations from Qur’an and Sunnah.(Fortress of the Muslim)

We ask Allah to grant us success to worship Him, and obey Him as He deserves – we ask Him to forgive us and show us His mercy, and to cure us for He is the Healer. And enter us in to the eternal Gardens of Paradise and protect us from His punishment. And all praise is due to Allah, the Lord of the worlds. May the peace and blessings of Allah be upon the Messenger, his family, his Companions and followers.

Some references are taken from Abukhadeejah.com, we pray that Allah blessings be on him and accept our supplications.