Many Muslims in today’s materialistic world are unaware of the implications of debt and how crucial it is, as an issue in Islam. Despite the obvious negative social and economic implications of debt in our society today, many Muslims still find comfort in living off credit, incurring debt to drown themselves in superfluous expenditure, trying to maintain a life style beyond their means and control. They borrow for the wrong reasons; either to fulfill their whims and desires or to become successful overnight just as they view their friends to be. They fall into unbearable debt and at times will have to pay one debt with another, forgetting that death may come at any time.

Taking unnecessary loan is a serious issue in Islam. Once you have what is sufficient for you to consume, you are not expected to obtain loan except if unavoidably necessary. You are expected to live without excess material consumption and be moderate in spending. Almighty Allah takes the issue of debt so seriously that the longest verse in His holy book was revealed because of it; hence, Islam frowns at excessive debt and encourages Muslims to avoid it as much as they can. This is due to the fact that debt brings many negative impacts on one’s faith, wellbeing and hereafter.

The implication of debt on one’s faith becomes apparent when the thought of huge debt preoccupies the mind of the debtor during prayers or in some cases, prevents him from going out for worship in an attempt to avoid the creditor, thereby undermining religious commitments.  Healthwise, debt has made a lot of people fall into grief and depression. It disturbs the mind so much that a debtor can become restless and distressed. He feels humiliated whenever he meets the lender and might become unduly submissive. Aside from humiliation faced on earth, on the day of resurrection, he may become bankrupt and will be detained as a debtor. He will only be able to pay back his debt with his good deeds!

One of the Salaf, Abdullah Ibn ‘Umar said: “O Humraan, fear Allaah and do not die in debt, lest it be taken from your good deeds when there will be no dinars and no dirhams.”

The following are excerpts from different narrations of our noble Prophet Muhammad showing instances of warning and negative consequences of incurring debts and not paying them until death.

3. “The soul of a believer is held hostage by his debt in his grave until it is paid off” [Tirmidhi].

4. “Your companion is being detained by his debt.” [Abu-Dawuud]

Similarly, the leader of the believers, Umar ibn Khattab once said “Beware of debt, for it starts with worry and ends with war” [Al-Muwatta]

For these strong reasons, it is advised for a Muslim to avoid debt as much as he can. This is not to say that debt is not permitted in Islam for there are cogent reasons that may necessitate one to obtain debt. 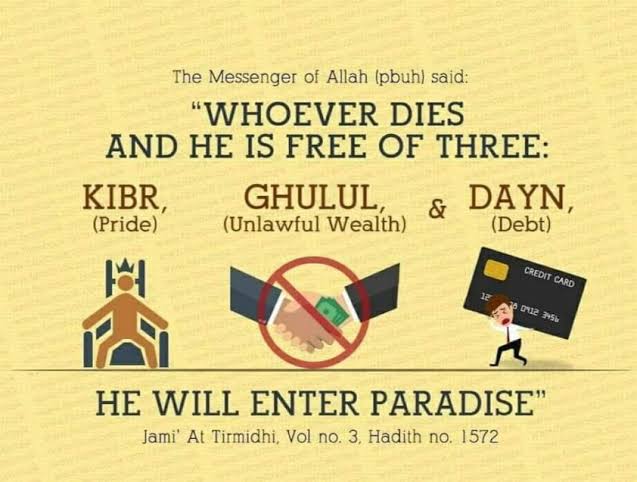 The following are three major conditions that a Muslim should consider before attempting to borrow or give out money in the event of a serious necessity.

1) The borrower should be determined to repay it. It is not permissible for a Muslim to acquire loan with the intention of not repaying. The Messenger of Allah (May the peace and blessings of Allah be upon him) said:

“if a man marries a woman with a dowry (that he will pay it for her later) and that he intends not to give it to her is an adulterer, and whoever borrows money and he intends not to pay it off is a thief” [Al-Albani].

2)  It should be known or thought most likely that he is able to repay it. One needs to be sure of his means of repaying his debts. The Messenger of Allah (May the peace and blessings of Allah be upon him) said:

“Whoever takes the money of people with the intention of repaying it, Allah will repay it on his behalf, and whoever takes it in order to spoil it, then Allah will spoil him.” [Al-Bukhari].

3) It should be for something that is permissible in Islam. The Prophet (May the peace and blessings of Allah be upon him) said:

“Whoever asks people for money when he has what is sufficient for him is only asking for more of the embers of Hell.” They asked him, “O Messenger of Allaah, what is sufficient so that he does not have to ask for more?” He said: “Having enough to eat lunch and dinner.” [Abu Dawud].

These conditions highlighted above are to protect and preserve relationships between Muslims as debt can lead to enmity in the society. More importantly, the best way for a Muslim to seek help in times of need is to seek help from Allah and have complete trust in Him because he is Ar-Razaaq- the Provider. Allah says “Indeed it is God Who is the Provider, the Lord of Strength, the Firm, the Stern” [Al-Zariyat: 58].

Some supplications to recite when seeking ALLAH’s help in paying off debts include: 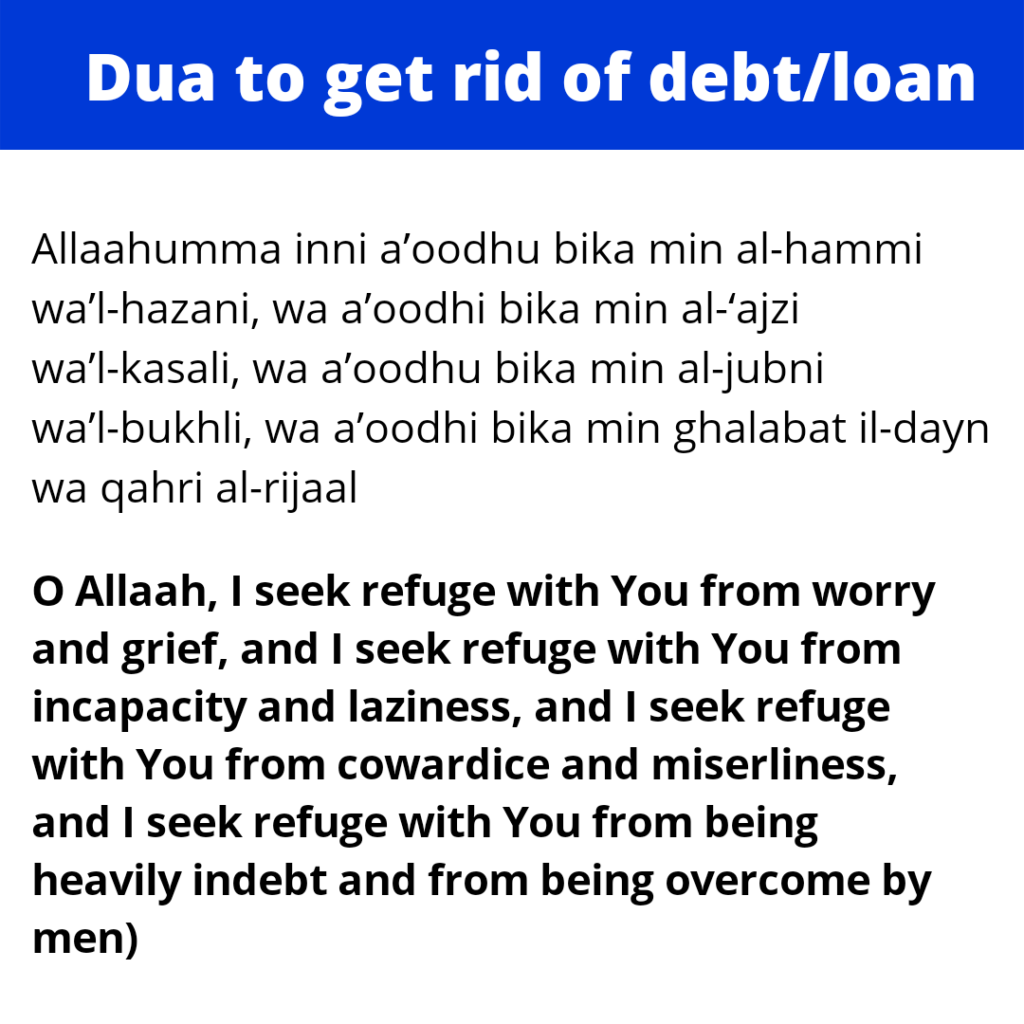 Lastly, the Creditor is also enjoined to make life easy for the debtor if the latter finds it   difficult to repay according to the agreement. Allah says: “If the debtor is in a difficulty, grant him time” [Al-Baqorah: 280]. God Almighty wants ease for us and so we should try make things easy for ourselves as much as we can.

May Allah save us all from poverty, worry, grief and debt (Ameen).