It is without doubt that every hoodum, thugs, thieves, kidnappers, bandits all stem from a home which affirms that global decline in morality has a lot to do with a Child’s family, home environment and social surroundings.

It cannot be overemphasized that the home plays a significant role in shaping the personality of a child and is an important source of development of a child. A negative home environment during the early years of life can lead to impaired development of a child. Actions and reactions of parents, manners, and attitude they possess leave a lasting impression on their children.

Parents are the mirror a child looks through to see his or her own image and are the first role model a child emulates. They exert enormous influence on their children and hence the latter reflect their parents either in words or action, imitating them more than anyone.

It is high time parents realized their children are a trust from Allah (Amanah). It is their job to make sure they become hard-working, productive, and most importantly, God-fearing individuals who will be an asset to the Ummah. The Prophet Muhammad (Peace and blessings of Allah be upon him) said,

“When a man dies, his action discontinues from him except three things, namely, perpetual sadaqah (Sodaqatun Jaariyah), or the knowledge by which benefit is acquired, or a pious child who prays for him.” [Sunan Abi Dawud] 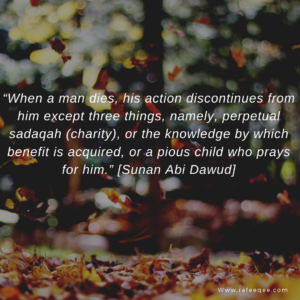 It is the responsibility of Parents to foster children’s development by providing them with a safe and stimulating home environment. It is paramount that parents create a strong foundation and proper understanding of Islam regarding the child’s core beliefs (Aqeedah).

Hence, in Islam, parents shoulder the primary responsibility for providing their children the optimal means to strengthen and maintain their faith. Parenting in Islam is part of one’s personal accountability and servitude to Allah through one’s virtuous conduct and service to His creation. Parents are to raise responsible children who will contribute to the society and to the Muslim Ummah in a productive way.

These can be achieved in several ways:

Time spent outside on social media; on entertainment can be centered on raising the children so as to be a better version of themselves.

We are given instruction and lessons through the narratives of the noble prophets and believers, such as those of Ibrahim, Yaqub, and Luqman (May Allah be pleased with them). Detailed accounts are found in the biography and methodology of the final Prophet, Muhammad ﷺ on the importance of teaching the Oneness of Allah (Tawhid), sincerity in all affairs concerning worship and worldly matters (Ikhlas), good character (Akhlaq), etiquette and the appropriate response in all situations (Adab) within the Islamic framework of justice and compassion.

This aspect emphasizes how to prioritize the needs of children to ensure spiritual and physical well-being in this world as well as ultimate success in the Hereafter. Some parents focus on nurturing kids on social skills and western education alone neglecting the Islamic aspect. Parents are to focus on all aspects and as well place priority on the bedrock and foundation which is the teachings of Islamic Values.

It is the awareness of Allah, His Names and Attributes, and the desire to connect with Him out of love and servitude towards Him that must be at the forefront of what is taught and applied at all times to strengthen that Islamic identity. Islam assigns parents guardianship and primary responsibility for their children in terms of the child’s physical, emotional, and spiritual wellbeing.

The concept of the fitrah is mentioned in the Qur’an and Sunnah as the innate aspect of human nature each of us is born with. The fitrah is naturally inclined toward the worship of Allah and toward morality. When parents provide the ideal environment in which to strengthen and maintain the child’s natural disposition to believe in Allah and to live by the moral compass and guidance Islam provides, the fitrah will remain strong and protected from corruption, enabling the child to remain steadfast in faith and practice. Their stage of upbringing is the time to teach them secular and religious knowledge, halal versus haram, and all the things they need to know. They need to be trained on what is correct and good behavior, then they will have the guidelines to act within the boundaries and will not be left wondering and confused.

Training Them To be Responsible

As each of us is responsible for what is in our care, so too does the child need to be taught responsibility. Being responsible teaches the child to be independent, but also dependable, reliable, and productive. It makes him feel that he has a role in the family and a role in society instead of feeling useless. He will develop a sense of belonging and be a useful member of the family and society. Parents need to inculcate good qualities and capabilities among children which will build them to be a good citizen.

Teaching them about the Companions:

Emphasis should be laid on the teachings of the heroes of Islam (Companions) instead of batman or superman; tell them about the history of Ali bin Abi Talib and other famous Muslim disciples of the holy prophet. Share with them the real sacrifices made by Muslim heroes for a peaceful society. It is good for children to sit among the adults especially when they have Islamic talk.

Acknowledging their Efforts
Praise is one of the most important and powerful tools ofr making children feel special. They feel a sense of pride when you praise them in front of others for their good actions. But do remember only praise them for good deeds not wrong. Anas bin Malik, a Companion of the Holy Prophet Muhammad narrates that the Holy Prophet (Peace Be Upon Him) said:”

Respect your children and cultivate in them the best of manners.” 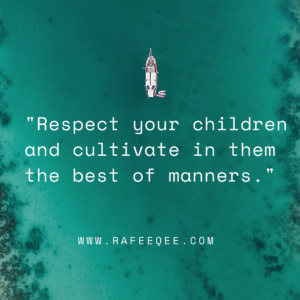 Being a Responsive Parent

Responsive parents are better off authoritative parents as the latter only impose without anyone questioning. This will not motivate a child do any act with passion except for the fear of not being scolded. Behind the parents, they ignore whatever they are imposed to do. Being responsive is to acquaint them with religious teachings (of Islam) in a way they would love and understand. There is need to make them know the benefits of reading the Quran, doing their morning and evening remembrance (Adhkar), using the hijab etc. Parents are to provide guidance to children on how to be a better Muslim.

With these few practices, Parents can successfully shape their children to be responsible and God-fearing that will respect other human beings. They would never want to harm anyone and would always want to promote their deen everywhere they are.

May Allah make our children righteous and pious servants of Allah.