All praise is due to Almighty Allah for making us muslims, for indeed the benefits that abound in being a believer is unquantifiable. The submission to the will of Allah and guidance of His Words and the teachings of His prophet (PBUH) make us Muslims.

Allah has willed it upon every human to experience trials and afflictions in this life, but what differentiate believers from those who don’t believe is how they traverse these trials. Believers are encouraged to adhere strongly on hope, and trust in Allah. 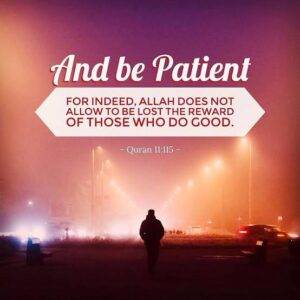 Perseverance is the continued effort to do or achieve something despite difficulties, failure, or opposition.

To attain goodness and greatness requires perseverance. The need to continue to strive even when all hope seems lost.

The life of this world is designed as a trial for Muslims, Allah say,

“Do the people think that they will be left to say, “We believe” and they will not be tried?” [Surah Al-‘Ankabut:2].

Often times when some Muslims are down with an illness or they are afflicted, they start to question their belief out of impatience. Perhaps in cases where the source of their tribulation cannot be ascertained, they make statements of disbelief: “Why are they the ones experiencing this hardship”.

They forget that the will of Allah will prevail. We are encouraged to admonish one another about perseverance and Allah’s Promises to help those who depend on Him. There is need to be cautious whenever we are afflicted with illness or we are caring our loved ones who are sick. Standing firm in these difficult times elevate our Eeman, bi idnilLaAh we get rewarded by Allah.

Allah’s Will is certain and it will come according to Qadar, If we as Muslims stay true to the words of Allah and we do good, our goodness and efforts will not go to waste.Various verses of the Holy Quran reiterates us of Allah’s test and the need to stay firm to our beliefs, then we shall be successful, by Allah’s Grace.

Even when we are down with illness, we must continue to glorify Almighty Allah and read his holy book for we will attain true rewards and healing. Often times when some Muslims fall ill, they tend to abandon the prayers in the hopes that they will return to it when they are better. But who is to say if they will live beyond the illness. When we are around sick people, we must make it an habit to constantly remind them to perform their prayers and read the Quran. Perhaps their sickness is an expiation for their sins.

The need to persevere in illness is highly necessary upon Muslims. Our patience to weather through the storm increases our Iman and affirms our belief. Prosperity abound when we have patience in Allah’s will. 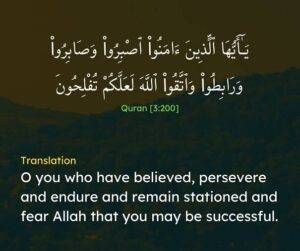 “Oh you who believe! Patiently endure, persevere, stand on guard, and be mindful of Allah, so you may be successful.” (Quran, 3:200)

The ability to persevere is not in the short term reward but for the long term benefit. It is easier to endure for a short while when we see the end in sight. This verse of the Quran is a reminder that we all must persevere in being patient, and that the reward will be from Allah Himself.

Another verse of Surah Imran affirms the need for perseverance as evident in the lives of the prophet and his predecessors. We should never lose our heart.

…And many a Prophet (i.e. many from amongst the Prophets) fought in Allah’s Cause and along with him fought large bands of religious learned men. But they never lost heart for that which did befall them in Allah’s Way, nor did they weaken nor degrade themselves. And Allah loves As-Sabirin (the patient ones, etc.). (Quran, 3:146) 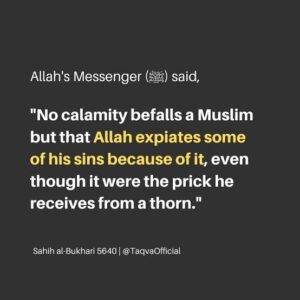 As Narrated by Abu Sa’id Al-Khudri and Abu Huraira:

The Prophet said, “No fatigue, nor disease, nor sorrow, nor sadness, nor hurt, nor distress befalls a Muslim, even if it were the prick he receives from a thorn, but that Allah expiates some of his sins for that.”

Some might take it further by becoming suspicious of others as the source of their affliction and often times make them seek solutions from means of kufr. This destroys their faith and if Allah wills, they are restored on the right path. We must learn that Allah will test us and it will never be beyond what our capacity can withstand. For every moment of happiness, there are moments of unhappiness.

Narrated by Abu Huraira: Allah’s Apostle said, “If Allah wants to do good to somebody, He afflicts him with trials.”

“And We shall test you with something of fear and hunger, some loss in goods, lives, and the fruits of your toil. But give glad tidings to those who patiently persevere. Those who say, when afflicted with calamity, ‘To Allah we belong, and to Him is our return.’ They are those on whom descend blessings from their Lord, and mercy. They are the ones who receive guidance” (Quran, 2:155-157)

Narrated by Ibn ‘Abbas: Allah’s Apostle entered upon sick man to pay him a visit, and said to him, “Don’t worry, Allah willing, (your sickness will be) an expiation for your sins.” The man said, “No, it is but a fever that is boiling within an old man and will send him to his grave.” On that, the Prophet said, “Then yes, it is so.

I visited Allah’s Apostle while he was suffering from a high fever. I said, “O Allah’s Apostle! You have a high fever.” He said, “Yes, I have as much fever as two men of you.” I said, “Is it because you will have a double reward?” He said, “Yes, it is so. No Muslim is afflicted with any harm, even if it were the prick of a thorn, but that Allah expiates his sins because of that, as a tree sheds its leaves.”

Read the Qur’an when sick as it possess healing

Allah Almighty said: “And We send down from the Qur’an that which is a healing and a mercy to those who believe, and it increases the Zalimun (polytheists and wrong-doers) nothing but loss.” (Qur’an, 17:82)

When we fall sick and we feel so burdened that our whole world falls apart, we should remember that Allah is the one who created the illness and the cure.

Narrated by Abu Hurairah (RA): The Prophet said, “There is no disease that Allah has created, except that He has also created its treatment.”

We should connect with Allah more, do lots of dhikr, read the Quran and remember Allah for Allah is All forgiving and All Merciful.

And when we are faced with Affliction, we should remember that whatever is lost can be regained when we stand firm and on the truth. Allah gives and he takes.

I pray this serves as a reminder for me and you. May Almighty Allah continue to guide us alright.