Pride, a cloth that drags to hell

Pride is a garment that is hated in any society. It puts down its bearer in the sight of Allah and his slaves. It is a poison that makes someone feel he/she is better than others! It is a grave sin that Muslims should desist from. Pride is not an adornment for Muslims. In fact, one of the classes of people that will be punished with hell fire (Jahannam) is the arrogant ones! As Allah says: 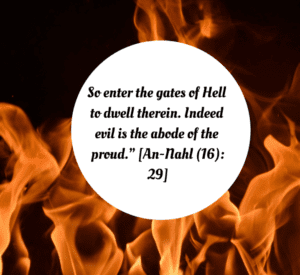 The opposite of pride is humility,  and this is what a Muslim should wear. This is what befits us as slaves of Allah. It is the quality of not thinking you are better than others. It is having a humble attitude and modesty. Submissive hearts, eyes, ears,  head, face and limbs, and everything that comes from them, such as our speech and actions. It is a sign of our love for Allah, the sincerity of purpose and key to success, as the fruit lies in the heart.

Pride, on the other hand, makes the heart diseased and deprives it of true submission to Allah. Pride can mean putting yourself above others, knowing the truth and refusing to accept, disobeying Allah and his messenger, dragging your garment below your ankle (men), and so on. Whatever form it takes, it reduces the nobility of humans, brews enmity, and unrest; and finally,  it will deprive its bearer of entering the gardens of paradise on the day of judgment. According to one hadith, the Prophet (ﷺ) said:

“No one who has an atom’s-weight of arrogance in his heart will enter Paradise”(Muslim). 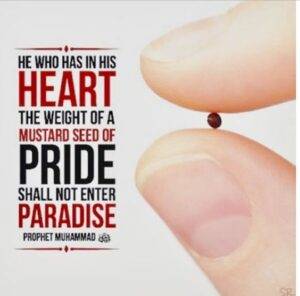 In addition, the arrogant ones are the followers of Shaytan, the accursed. Iblees was the first creature to disobey Allah by refusing to fall in prostration to Prophet Adam. Then he was asked

“What prevented you (O Iblees) that you did not prostrate yourself when I commanded you?’

He was bold to disobey the Almighty, in His presence and that earned him the wrath of Allah. Showing pride in divine messages is haram and can lead to doom. However, the prophets and angels are known for their humility, and Allah was pleased with them because of this. A case in point is the story that Allah revealed about his pious slave, Luqman, who gave admonition to his son to shun pride; “And turn not your face away from men with pride, nor walk in insolence through the earth.

The Muslims are expected to act in accordance with the teachings and practice of the prophets and angels. Allah says about the believers “….and they are not proud [As-Sajdah 32:15]. 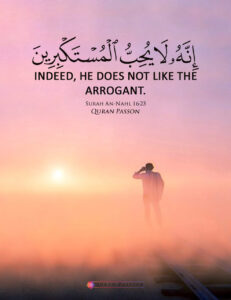 Why Muslims Should not be PROUD

Pride and Might solely belongs to Almighty Allah. He does not share it with anyone and whoever wants to compete with him will be punished. The prophet (ﷺ) said:

“Might is His garment and pride is His cloak; whoever seeks to compete with Me concerning them, I will punish him” (Muslim).

Anyone who tries to be arrogant and put himself above others, Allah will bring him down among the lowest of the low and will humiliate him.

The prophet (ﷺ) said “Whoever shows off, Allah will expose him” (Muslim).

Also, on the Day of Resurrection, the arrogant will be gathered like ants in the form of men. Humiliation will overwhelm them from all sides. They will be driven to a prison in Hell called Bawlas, with the hottest fire rising over them, and they will be given to drink of the juice of the inhabitants of Hell, which is Teenat Al-Khabaal (Al-Tirmidhi).

Another thing to keep a note of for is in adhering to how we dress. For men, dragging the garments beyond the ankle is also considered as pride in Islam. The Sunnah stipulates that the lower garment (Izaar), shirt, or turban should not be allowed to drag below the ankle. On the day of judgment, Allah will not look at anyone who shows pride and will deprive them of his love. The prophet (ﷺ) said in one hadith “Beware of wearing one’s lower garment below the ankles, because this is a kind of showing-off, and Allaah does not love showing-off” (Al-Tirmidhi). For women, it is best to cover from head to toes as it is the prescribed mode of dressing.

Muslims should seek to please Allah and follow his messenger. This will ensure that they remain guided and guarded at all times and be free from filthy human acts such as showing-off. In addition, parents, leaders of communities, institutions, and religious centers should preach and practice this virtue to build a good and peaceful society where humility is recognized and rewarded.

And Allah is our source of strength.

May Allah grant us the best character and accepted deeds.