Qurbaani: A Feast of delicacy or an Offer of Submission and Obedience

Eid al-Adha is coming very soon. To most people, the best way to describe this blessed day is the slaughtering of animals. On a closer look, would it be enough to use this description?

As Muslims, it is no news that our main purpose of existence is to WORSHIP Allah. And one important and beautiful act of worship that brings joy to us all is Qurbaani, a celebration of sharing and giving thanks.

Qurbaani or Udhiyah simply means sacrifice. But as Muslims, when we hear the word ‘SACRIFICE‘, we know this is done by someone that submits totally to the will of his Creator and denounces Shirk, and does not follow his sinful desires, not the ones done by nonbelievers. Every activity is tailored around these beliefs in making sure that we are striving towards connection to Allah, alone. Obedience is the cornerstone of all forms of worship, and as long as any deed is spiced with the right intentions, sincerity, and conformity with the sunnah of the noble Prophet Muhammad (peace be upon him), then, we can call our actions SACRIFICE.

One of the acts of worship is offering sacrifice (Slaughtering animal) for Allah alone. This is
often done at the birth of a newborn (Aqeeqah), or maybe simply done with the sole intention of
thanking Allah for his favours. However, another reason why an animal sacrifice is made in
Islam is to follow the sunnah of Prophet Ibrahim (Peace be upon him). Typically, this occurs
during the month of Dhul Hijjah, specifically after the Eid prayer on the 10th till the 14th day This
type of sacrifice is called Udhiyah, which is also called “Qurbaani”.

Whatever offerings we make to Allah must be carefully done in order to be accepted! The act of slaughtering animals for other reasons apart from Allah is shirk. Such an offering will not be accepted. PIETY is the major reason WHY offerings are accepted by Allah. In the Holy Qur’an, two sons of Prophet Adam made Qurbaani to Allah but He only accepted one, based on the piety of the person offering it. Allah says:

“Behold, God accepts only from those who are conscious of Him” [Al-Maaidah 5:27].

In another verse, He says:

“It is not their meat nor their blood that reaches Allah. it is your piety that reaches Him” [Al-Hajj 22:37]. 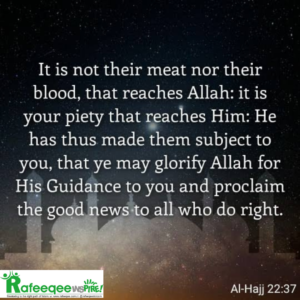 The above verses emphasize what we Muslims should keep in our minds as we gradually prepare for Udhiyah offering in the coming month of Dhul Hijjah. Muslims should realize that Qurbaani is an offering that depicts SUBMISSION to Allah and the sunnah of his Prophets (May Allah be pleased with them). The believe that Muslim sacrifice the blood of the slaughtered animals is a fallacy, and it is a disrespectful thought. Infact, it is only said by those who have no knowledge about our Lord.

Allah never Needs the animals or the blood, His Supremacy exceeds this thought, that the nonbelievers associate with Him. The main reason is to test our piety, and to feed those who are in need. It is important to keep this in mind, while we remember this feast, as many people still believe that the blood and meat of the animal is what Allah needs, but this is false!

Qurbaani is one of the signs of Allah and its sacrifice is made to draw closer to Allah.

Significance of Qurbaani to the Muslim Ummah

⮚ Remembrance of Allah (Dhikr): One of the essence of Udhiyah is to praise Allah for his favours.

⮚ Feeding the Poor and Needy: One of the recommended sunnah on Udhiyah is for it to be distributed for the poor and needy to bring smiles unto their faces, as Allah has commanded in the Qur’an

“Then eat thereof and feed therewith the poor who have a very hard time” [Al-Hajj 22:28].

⮚ Reviving the Sunnah of Prophet Ibrahim: The great history behind the observance of the slaughtering ritual is revived in the 12th month of the Hijrah calendar every year. This commemorates a huge test of faith in which Muslims are implored to imbibe.

⮚ Celebration for the Muslims: The days of slaughtering (10th) and the Ayaam Tashreeq are for eating and drinking. It is not permissible for Muslims to observe fasting in them.

1. The owner is encouraged to slaughter it himself or be present where it is to be slaughtered, except in genuine reasons of absence.
2. The name of Allah must be mentioned before slaughtering.
3. Udhiyah animals should not be used to fight; this is frowned upon as it is endangering/oppression to the animals.
4. Lame, sick, emaciated and animals with broken eyes are not permissible for Udiyah. Healthy animals are what should be used.
5. A sheep/ram is good enough for a man and his family.

6. A cow or camel can be shared by seven people.

7. Animals must reach age of maturity (6 months for Sheep, 1 year for goats, 2 years for cow and 5 years for camel
8. If an Udiyah gives birth, its offspring should be slaughtered with it. 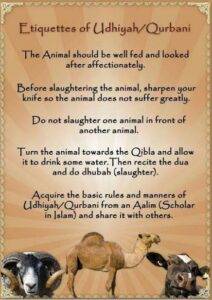 These points are to ease the process for us all, and to make us all have a fun filled celebration, as Allah Only Wants ease on His Slaves. The feast is to dedicate obedience and submission to our Lord, and thanking Him, while making the people around us happy, by sharing and gifting.

With these in mind, we hope that you remember