RAMADAN: THE WISDOM BEHIND FASTING IN THE BLESSED MONTH

The month of Ramadan in which was revealed the Quran is a period that Muslims welcome with ecstasy across the globe. While the significance of this time cannot be overemphasized, the rewards that come with it are just too enormous. Ramadan is synonymous with fasting followed up with good deeds. Allah prescribed the holy month to the believers to rectify their actions and purify their soul with a goal of attaining piety. The reason for this authorization by The Most-High Lord is far beyond the rewards. It entails physical, spiritual, and mental benefits which many of us often take for granted.

In this piece, we’d look at ten merits derivable from this blessed duration in sha Allah.

Narrated by Ibn Salam who heard from Muhammad Ibn Fudoyl who said: It was narrated from Yahya IbnSa’eed, who reported from Abu Salamah, who reported from Abu Hurairah (May Allah be pleased with all of them): Allah’s Messenger (May the peace and blessings of Allah be upon him) said, “Whoever observes Saum (Fasting) during the month of Ramadan out of sincere faith, and hoping to attain Allah’s Rewards, all his past sins will be forgiven.” — Sahih Al-Bukhari 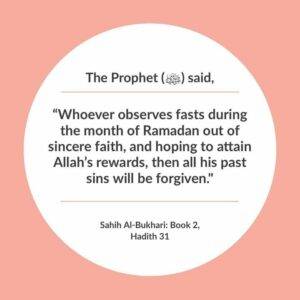 “When the month of Ramadan begins, the gates of the heaven are opened; the gates of Hell-fire are closed, and the devils are chained.” (Sahih Bukhari) 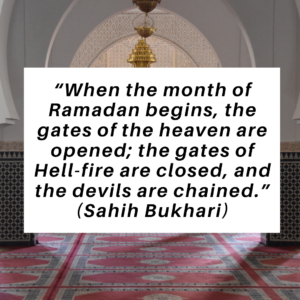 “On the first night of the month of Ramadan, the devils are chained, the jinn are restrained, and the gates of Hellfire are closed and none of its gates are opened. The gates of Paradise are opened and none of its gates are closed. A caller announces: O seeker of good, come near! O seeker of evil, stop short! Allah will save them from the Hellfire and that is during every night of Ramadan.” — (Tirmidhi) 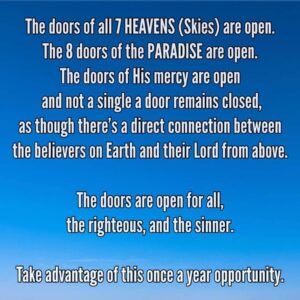 May Allah count us among those who will witness Ramadan from the beginning till the end and grant us the ability to do acceptable deeds. May we be among the people who would be totally forgiven, emancipated and earn His love. Ameen!