REMEMBRANCE OF ALLAH (DHIKRULLAH)
Subhanallahi wa-bi’hamdihi; Subhanallah hil-adheem
Ibn Taymiyyah wrote, “Remembrance of Allah is to the heart what water is to fish. What happens to a fish when it is taken out of water?”
Imam Shams ad-Din ibn al-Qayyim wrote about nearly eighty benefits that come with the Remebrance of Allah (Dhikrullah) in his book al-Wabil al-Sayyib.
Remembrance of Allah is sustenance for both the heart and the spirit. If the servant is deprived of it he becomes like a body which has been deprived of food.
Remembrance of Allah also drives away shaytan by suppressing him and breaking him; it is pleasing to the Merciful, Mighty and Exalted Allah. His remembrance dispels worry and melancholy from the heart and adorns it with delight and joy, fills the heart and face with light, and cloaks the one who remembers Allah with dignity, gentleness and freshness. It instills His love, fear of Allah and relating all matters to Him. It also enhances Allah’s remembrance of His servant, for Allah says:

Therefore remember Me (by praying, glorifying, etc.). I will remember you, and be grateful to Me (for My countless Favours on you) and never be ungrateful to Me. (Q2:V152) 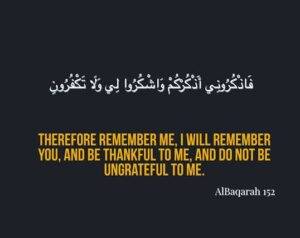 Even if this were the only reward for the remembrance of Allah, it would be mercy and honour enough, for such a heart is always aware and free from wrong actions.
Although remembrance is one of the easiest forms of worship, the mercy and honour that it brings cannot be acheived by any other means. Abu Huraira reported that the Prophet Muhammad (PBUH) said, “Whoever recites the words, “There is no god but Allah, the One, having no partner with Him. All Sovereignty belongs to Him and All praise is due to Him, and He is Powerful over everything’, one hundred times every day, there is a reward equal to freeing ten slaves for him, and a hundred good actions are recorded for him, and a hundred wrong actions are removed from his record. That is a safeguard for him against shaytan on that day until evening, and no one brings anything more excellent than this, except the one who has done more than this (that is, who recites these words more than one hundred times).”
Jabir reported that the Prophet (PBUH) said, “Whoever recites the words, “Glory be to Allah and His is tall praise will have a palm tree planted for him in the Garden.”
Ibn Mas’ud, may Allah be pleased with him, said, “To Praise Allah, may He be Exalted, is more dear to me than spending the same number of dinars (as the number of times I praise Him) in the way of Allah.”
Remembrance of Allah is a remedy for hard hearts. A man once told al-Hassan, “O Abu Sa’id, I complain to you about the hardness of my heart.” He said, “Soften it with the remembrance of Allah.” Makhul said, “Remembrance of Allah is (a sign of) health, while remembrance of people is like a disease.” A man once asked Salman, “Which deeds are the best?” He said, “Haven’t you read in the Qur’an:
Recite (O Muhammad SAW) what has been revealed to you of the Book (the Quran), and perform As-Salat (Iqamat¬as¬Salat). Verily, As-Salat (the prayer) prevents from Al-Fahsha’ (i.e. great sins of every kind, unlawful sexual intercourse, etc.) and Al-Munkar (i.e. disbelief, polytheism, and every kind of evil wicked deed, etc.) and the remembering (praising, etc.) of (you by) Allah (in front of the angels) is greater indeed [than your remembering (praising, etc.) Allah in prayers, etc.]. And Allah knows what you do (29:45). 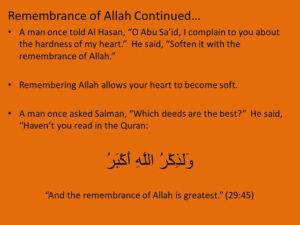 Abu Musa once related that the Prophet (PBUH) said, “The difference between the one who remembers his Lord and the one who does not is like the difference between the living and the dead.
Abdullah ibn Busr related that a man once told the Prophet (PBUH), “The roads to good are many and I am unable to take all of them, so please tell me something to which I can hold fast, but do not overburden me lest I forget it.” He said, “Make sure that your tongue is moist and supple with the remembrance of Allah.”
Continual remembrance of Allah increases a servant’s good witnesses on the Day of Resurrection. It is a means which prevents him from talking in the wrong way, such as backbiting and spreading tales and their likes. Either the tongue is mentioning Allah and remembering Him, or it is talking incorrectly.
Whoever has the gates of remembrance opened to him has an opening to his Lord, through which he will find what he seeks. If he finds Allah, he has found everything. If he misses the opportunity, he has missed everything.
There are several types of remembrance. The remembrance of the Names of Allah, Mighty and Glorious is He, the remembrance of His Attributes, and praising Him and thanking Him. All of these can take the form of saying, for example, ‘Glory be to Allah’, ‘Praise be to Allah’, ‘There is no God but Allah’. A servant can also remember Allah by referring to His Names and Attributes, such as by saying, for example, “Allah, Mighty and Glorious is He, Hears all that his servants say and do”; or by mentioning what He has commanded and what He has forbidden, such as saying, “Allah, the Mighty and Glorious, commands such and such, or forbids such and such.” 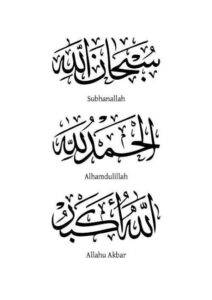 A servant can also remember Allah by talking about His blessings, while the best type of remembrance is the recitation of the Qur’an, because this contains remedies to cure the heart from all illnesses. Allah, the Exalted, says:

O mankind! There has come to you a good advice from your Lord (i.e. the Quran, ordering all that is good and forbidding all that is evil), and a healing for that (disease of ignorance, doubt, hypocrisy and differences, etc.) in your breasts, – a guidance and a mercy (explaining lawful and unlawful things, etc.) for the believers. (Q10:V57)

And We send down of the Qur’an that which is healing and mercy for the believers, but it does not increase the wrongdoers except in loss (17:82)

All the illnesses of the heart result from desires and doubt, and the Qur’an is a cure for both. It has enough clear signs and proofs to distinguish between truth and falsehood, and thus it cures the diseases of doubt which ruin knowledge, understanding and perception, by enabling a person to see things as they really are.
Whoever studies the Qur’an, and allows it to be absorbed by his heart, will recognise truth and falsehood and will be able to distinguish between them, just as he is able to distinguish between night and day.
As for curing the diseases that arise from desires, it is because it contains wisdom and good counsel. This recommends avoiding worldly gains and inspires a yearning for the akhira.

The Prophet (PBUH) once said, “Whoever wants to love Allah and His Messenger should read the Qur’an.”
The Qur’an is also the best means for bringing the servant nearer to his Lord, Glorious and Exalted is He. Khabab ibn al-Arat said to a man, “Draw closer to Allah as much as you can, and remember that you can do so by no means more pleasing to Him than using His own words.”
Ibn Mas’ud said, “Whoever loves the Qur’an loves Allah and His Messenger,” and sayyedina Uthman ibn Affan, may Allah be pleased with him, said, “If your hearts were really pure, they would never have enough of reciting Allah’s words.”
All in all, the most benefical thing for the servant is to remember Allah, Mighty and Glorious is He, constantly:
Surely in the remembrance of Allah do hearts find rest. ( Q13:V28)
And the Best kind of remembrance is to recite the Book of Allah, the Glorious and Exalted.
Credit: Yusuf Islam