The history of Islam is incomplete without the Hijrah migration of the noble messenger Muhammad PBUH. The journey from Mecca to Madinah occurred in this blessed month of Rabiul Awwal and lasted about fifteen days. Allah’s Apostle traveled along side his dedicated companion Abubakr ibn Abi Quhafah. This singular event heralded hope that led to the spread of Islam after prolonged persecution. The pagan Arabs rejected faith and belied the messenger PBUH. They tortured the Muslims with a grand plot to kill her prophet. The Muslims patiently persevered until Allah instructed His messenger PBUH to leave Mecca for Yathrib. This migration in the year 622 AD was what later established significant landmarks in the history of Islam. Here’s a few of those events:

1. Construction of the prophet’s PBUH mosque: On arrival in Yathrib, the first act embarked upon by the prophet PBUH was the building of the mosque. He asked that his camel should not be stopped as it was been directed by Allah and the masjid will be cited on the location where she kneels. The prophet PBUH led his companions in laying the fortress and completing the construction. The mosque of Yathrib was ultimate in simplicity and design. It’s material was unbaked bricks and mortar for the walls. While the roof was of date fronds supported by trunks of palm trees. The alcove of the mosque pointed toward Jerusalem in the north. Each of the other three sides were pierced by a gate. The floor of the mosque had no covering but mud, not even a coarse matting.

2. Revelation of Adhan and Injunction to Salat

It had become mandatory for the Muslims to pray five times daily in Yathrib. But there was no means to call for the prayers. Several suggestions were made to the prophet PBUH but only one was adopted. Abdullah bin Ziyad Al Ansari narrated to the prophet PBUH that while he was half-awake or half-asleep, a man appeared before him and told him that the human voice ought to be used to call the faithful to prayer. He also taught him the Adhan (call to prayer) and manner of saying it. This idea appealed to the Prophet ﷺ and he adopted it forthwith. He then summoned Bilal ibn Rabah and taught him how to call the adhan. This led to his honorable appointment as the first Muazzin -caller to prayer.

In due course, the city name “Yathrib” soon became obsolete. People began to call it “Madina-tun-Nabi,” — the City of the Prophet. It’s frequent usage caused a contraction of this name to be simply adopted as “Madinah” — “the City”. Till date, that’s the name the city of the Prophet ﷺ has remained. The transformation went beyond nomenclature. It soon became an abode of peace and socio-economical activities. There was room for learning and the growth of Islam became spontaneous. Muslims indulged in trade and agriculture and the community was rapidly developing as some other Arabs also joined the prophet in Madinah. 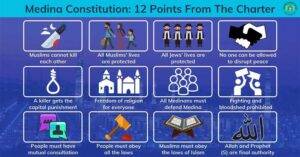 4. The charter of Madinah

The people of Madinah recognized Muhammad PBUH as their leader and in turn, he gave them a citizen’s charter. Yathrib was previously known for turbulent wars among it’s tribes. Also at that time, there were jews of different clans residing in Madinah and they were never forced to accept Islam. Hence, this document served as a charter of peace containing forty-seven articles. One of the most striking clause of this charter is as follows:

“The Jews who attach themselves to our commonwealth shall have an equal right with our own people to our assistance and good offices. The Jews of the various branches domiciled in Yathrib shall form with the Muslims one composite nation. They shall practice their religion as freely as the Muslims. The clients and allies of the Jews shall enjoy the same security and freedom”. (The Messenger, the Life of Mohammed, New York, 1946)

5. Brotherhood of the Muhajiroon and Ansar

One of the beauties the Hijrah birthed was the brotherhood between the Muslims. The Muhajiroon were the migrants who left Mecca in search of refuge in Madinah. While the Ansar are the inhabitants of Yathrib that warmly welcomed the prophet and his companions. The impeccable scenario is as described in the following hadith: Narrated Anas: When ‘Abdur-Rahman bin ‘Auf came to us, Allah’s Apostle made a bond of fraternity between him and Sad bin Ar-Rabi’ who was a rich man, Sad said, “The Ansar know that I am the richest of all of them, so I will divide my property into two parts between me and you, and I have two wives; see which of the two you like so that I may divorce her and you can marry her after she becomes lawful to you by her passing the prescribed period (i.e. ‘Idda) of divorce. ‘Abdur Rahman said, “May Allah bless you your family (i.e. wives) for you.” (But ‘Abdur-Rahman went to the market) and did not return on that day except with some gain of dried yogurt and butter. He went on trading just a few days till he came to Allah’s Apostle bearing the traces of yellow scent over his clothes. Allah’s Apostle asked him, “What is this scent?” He replied, “I have married a woman from the Ansar.” Allah’s Apostle asked, “How much Mahr have you given?” He said, “A date-stone weight of gold or a golden date-stone.” The Prophet said, “Arrange a marriage banquet even with a sheep.” (Bukhari)

In the early days, the Muslims faced the direction of Jerusalem while praying. Until Allah revealed the verses in Qur’an 2[Baqarah]:144, which says

“We have certainly seen the turning of your face, [O Muḥammad], toward the heaven, and We will surely turn you to a qiblah with which you will be pleased. So turn your face [i.e., yourself] toward al-Masjid al-Ḥarām.1 And wherever you [believers] are, turn your faces [i.e., yourselves] toward it [in prayer]. Indeed, those who have been given the Scripture [i.e., the Jews and the Christians] well know that it is the truth from their Lord. And Allah is not unaware of what they do”. 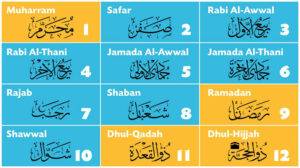 It’s been one thousand four hundred and forty-three years since the aforementioned events occurred. The Muslims during the time of Umar wanted to have a calendar system to mark events and the Hijrah migration was suggested as a starting point. As Muslims, we do not celebrate a new year like the Gregorians. However, the significance of the hijrah is to measure the passage of time in line with acts of worship like fasting and hajj. So that historic migration of the noble messenger PBUH air-marked the counting of the islamic calendar.