The concept of Tawbah is often treated with negligence amongst people despite the fact that steadfastly holding unto it is the wisest and noblest act. Tawbah means “Repentance” i.e to return to Allah in sober reflection of our misdeeds. It is an important concept in Islam as it is said to be a gift by Allah to His worshippers, because through sincere repentance, Allah forgives and cleanses us of the misdeeds and transgressions accumulated due to our human weaknesses. Our Lord Knows our nature, and how vulnerable we are; that we are creatures that are susceptible to making mistakes. To purify us, Allah has granted us the privilege to seek repentance.

Tawbah is cited in many parts of the Holy Quran to guide and remind us of how much Allah wants us to seek His Forgiveness through sincere repentance. In fact, one of the beautiful Names of our Lord is At-Tawwaab, which means “The Oft Forgiving”. According to islamic scholars, true repentance consists of REFRAINING from sins, REMORSEFULNESS on past sins, RESOLVING not to return to past things, and RETURNING people’s rights back to them.

Repentance is a continuous process in the lifetime of a believer. Allah says 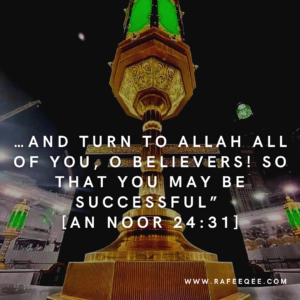 Here, the believers are called to turn to Allah, which is synonymous with repentance and the call to believers is a call towards success or prosperity, which is to tell us the correlation between seeking repentance and true success. We all seek success, and for any definition of success that we seek we need to completely rely on Allah. To seek Allah’s face for success, seek forgiveness through Him.

In another verse, Allah says

“…and whoever does not turn to Allah, those are the evildoers” [Al-Hujurat 49:11]

Thus, not seeking repentance or being ignorant of our wrongdoings is similar to evil doing, as such negligent people fail to acknowledge Allah’s Rights, and are unaware of their faults and the bad consequences of their wrongs. The ignorance “seeking repentance” has blindfolded them and makes them walk arrogantly on earth without racing to repentance. Even the best of mankind was reported to continuously seek Allah’s Forgiveness. Our beloved prophet was humble and pure, he was aware of the beauty and benefit of seeking Allah’s Face through true Repentance. In one narration, he said “I ask Allaah for forgiveness one hundred times a day ”[Muslim].

The essence of seeking repentance is to return to Allah and leave the paths that hinders our submission or obedience to His Commandments and return to the righteous way in order to receive abundance blessings and favours from the almighty. In other words, sincere repentance is the secret of strength to any nation. The Qur’an says :

“And O my people! Ask forgiveness of your Lord and then repent to Him, He will send you (from the sky) abundant rain, and add strength to your strength, so do not turn away as, disbelievers in the Oneness of Allah” [Hood 11:52]

As humans, we are prone to mistakes, and this exposes us to temptation, hence the need for continuous repentance. We need to always on guard. We are advised to always ask Allah to never leave us to our soul, for if Allah protects and guides one, sins cannot reach one, and one will be more mindful and race to seek repentance, and not be like the ignorant ones who rejoice in their sins because of unconsciousness and lack of awareness of what is coming ahead.

Believers should never be happy with disobedience to Allah nor enjoy it. If such people commit sins, their hearts feel sorrow and in pain, and if they get intoxicated by their sins then guilt is lost and this can be dangerous as it can lead to destruction. To repent back to Allah, one should consider the following:

1. Fear of death before repentance

2. Regret over what was missed by violation of the command of Allah

3. Work hard to redress it

One should know that seeking true and sincere repentance means that we would not commit such sins again, and actively hold ourselves. There is danger in persistently disregarding Allah’s Command and the determination to go back to such sins after seeking repentance is another sin and very dangerous than the first sin; this can make one completely lost. A very good example is someone who follows a friend to a party where alcohol is being served, despite being aware of the commandment of Allah against intoxicant; this person agreed to have a taste, thinking he can go home and make tawbah, and finds the alcohol enjoyable. With this mindset, this person continuously go to such gathering, takes small portions, and go back to being remorseful; this act is being discouraged as it is a deliberate action, and the person is not aware of where death will meet him/her. And for such reason, there is a possibility that this person may get lost as it seems to be a deliberately persistent disobedience. (And Allah Knows best)

Allah is the Most Merciful, He is the Pardoner, the Ever Relenting, and He calls us to repeated seek repentance in order to earn Allah’s love. “Truly, Allaah loves those who turn unto Him in repentance …………”[Al-Baqarah 2:222]. One needs to strive hard to hold fast by having true and sincere repentance because the essence of Tawbah is to regret whatever one commits in the past, abstain from it immediately and make firm resolution not to commit it again in the future, as it was recorder that the prophet may Allah be pleased with him said, ‘regret is repentance’ hence, all these three conditions are said to be found at the time of repentance, and this is seeking Allah’s Help against ourselves and our misdeeds.

“Only You we worship, and only You we turn to for help” (Quran 1:5)for indeed the help of Allah comes to those who seek His Help. One of the ways to seek His help is true repentance. Seeking steadfastness through repentance is an armor that we all should shield ourselves with. And the Decree of Allah supersedes all. May we be among those who are rightly guided and those who repeatedly seek His forgiveness and repent to Him for Mercy. 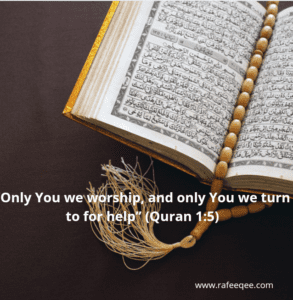 Glory be to Allah who made Himself known to us with a variety of signs and opened for us many paths to return to him after going astray. We ask Allah to keep all of us firm in the deen and bless our striving to achieve success in this life and hereafter.