Jumu’ah (the day of gathering) is an exclusive day for Muslims as it has been decreed by Allah. A day where a whole chapter of the Qur’an (Suratul Jumu’ah:chapter 62) is dedicated to.
The significance and the grace of this day of jumu’ah cannot be over emphasized as captured in a hadith reported by Abu hurairah:

Abu Hurairah (may Allah be pleased with him) reported that the Prophet (peace and blessings be upon him) said: “The best day on which the sun has risen is Friday; on it Adam was created and on it he was made to enter Paradise. On Friday, also, Adam was expelled from Paradise. And the [last] hour (i.e. the Day of Resurrection) will take place on no day other than Friday.” (Muslim) 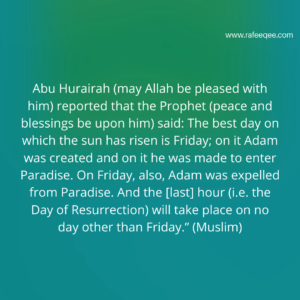 In addition to this, there is a particular hour on the day of jumu’ah wherein a slave calls upon his Rabb and asks for anything for his benefit that his prayers will be answered. This is emphasized in Hadith stated by Abu Hurairah (may Allah be pleased with him) who reported that the Prophet (peace and blessings be upon him) said while talking about Friday:

“There is a time on it (i.e. Friday) at which Allah grants the request of any Muslim servant who, at this time, happens to be asking Allah for something while standing in Prayer” And the Prophet (peace and blessings be upon him) pointed with his hand to indicate that this period of time is very short. (Al-Bukhari and Muslim)

Note: It is best to refrain from asking for something haram like; wanting to destroy another human, coveting another human’s belongings or praying for the death of another human.

On the day of Jumu’ah, Muslims are expected to do Four major things:
– First is to constantly remember, praise, and worship Allah Subhanahu wa ta’ala as well as answering the call to Jumu’ah prayer without any restraint.
Allah Subhanahu wa ta’ala says in suratul Jumu’ah…O believers! When the call to prayer is made on Friday, then proceed ˹diligently˺ to the remembrance of Allah and leave off ˹your˺ business. That is best for you, if only you knew. (Q62:9)
And when the prayer has been concluded, disperse within the land and seek from the bounty of Allah, and remember Allah often that you may succeed. (Q62:10) 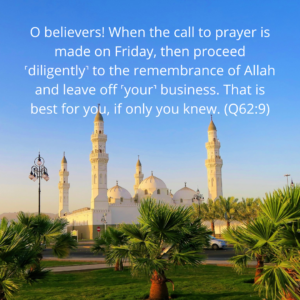 – Second is to seek blessings upon our Noble Prophet (Peace be Upon Him) more as Abu Mas’ud al-Ansari reported that the The Prophet, peace and blessings be upon him, said,

– Third is to recite Suratul Kahf which is the 18th Surah of the Qur’an because Abu Sa’id al-Khudri reported that the Prophet, peace and blessings be upon him, said,

“Whoever recites Surat al-Kahf on Friday will have a light between this Friday and the next.” (Source: al-Sunan al-Kubrá 5856)

Also Abu Bakr ibn Mardawayh reported that Prophet (Peace be Upon Him) said “Whoever reads Soorat al-Kahf on the day of Jumu’ah (Friday), a light will shine for him from beneath his feet to the clouds of the sky, which will shine for him on the Day of Resurrection, and he will be forgiven (his sins) between the two Fridays.”

-Lastly, we are expected to perform spiritual bathe before going to the Masjid as narrated by Abu Sa’eed who reported that the Prophet (Peace be upon him ) said, “Ghusl on Friday is obligatory (wajib) on every adult, as is using a toothbrush and applying some perfume.” (Related by al-Bukhari and Muslim.)
In another narration, Abu Sa’id al-Khudri reported: The Messenger of Allah, peace and blessings be upon him, said,

“Taking a bath on Friday is a duty upon every person who has reached the age of puberty.” (Source: Ṣaḥīḥ al-Bukhārī 839, Ṣaḥīḥ Muslim 846)

For these reasons aforementioned, it is advised to do the best that we can to utilize the golden opportunity embedded in this day and to live every hour on Friday like it is our last .

Whatever is in the heavens and whatever is on the earth is exalting Allah, the Sovereign, the Pure, the Exalted in Might, the Wise. (Qur’an 62:1) 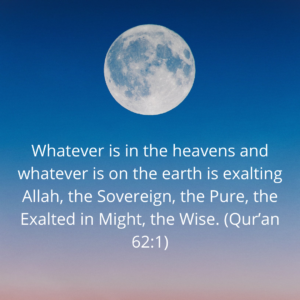 We seek refuge with Allah from shaytaan the accursed who adorn evil and makes it look good to mankind. Mankind gets carried away with the affairs of the world while other creations are in constant fear of the end of the world.

May Allah Subhanahu wa Ta’ala make this reminder beneficial for me and you.Ameen