One of the fundamental principles of faith [Eemaan] is al- Qadar which means, belief in the “Divine Decree, both good and bad.”

The Messenger of Allah, ﷺ said: “If anything happens to you, do not say, ‘If only I had done such and such, then such and such would have happened.’ Instead Say, ‘Qaddar Allaah wa maa sha’a fa’al (Allaah decreed and what He wills happens), for ‘If only’ opens the door to the devil” [Muslim]

A lot of us contradict this saying of our Prophet, by our reaction to incidents or problems, in our usage of the statement ‘if only’.

A very good instance is when something turned out as we never projected, most people are fond of saying ‘If only I had done such and such, then such and such would have happened’? One need to know that this statement is similar to dragging issues with Allah’s ordainment by saying so? Such expression has been forbidden in Islam when intending to express grief for the past and distress of what has been decreed.

A true believer must realize that The effect of such reaction and expression makes you vulnerable to grief and fear, which is harmful to you and eventually, might be of no benefit. There is need to remember that Allaah has decreed everything that happens in the universe according to His prior knowledge and the dictates of His wisdom. Allaah says:

“And your Lord creates whatsoever He wills and chooses” [Al-Qasas 28:68].

Another effects of uttering these statements ‘If only I had done such and such, then such and such would have happened” is that; The word “if” opens the doors to the devil, and the doors of doubt. “If’ is a conditional word which serves as a tool for evil of Shaytaan against the believer’s fate, he uses it to open negative thoughts into their hearts and makes them regret over what has passed, and consequently gain negative impact on both psychological and spiritual of one’s life.

Allaah says: “O you who believe! Be not like those who disbelieve (hypocrites) and who say to their brethren when they travel through the earth or go out to fight: ‘If they had stayed with us, they would not have died or been killed,’ so that Allaah may make it a cause of regret in their hearts” [Al-Imraan 3:156].

It is more rewarding to say ‘Qaddar Allaah wa maa sha’a fa’al (Allaah decreed and what He wills happens), as this lightens the heart and makes one more content, and feel calm by accepting Allah’s will and the Divine Preordainments. Aside, the tranquility that our hearts feel by mentioning ‘Qaddar Allaah wa maa sha’a fa’al’ instead of ‘if only’, is that it helps in increasing our Eemaan and entrusting our heart completely to the Almighty as a result of our submission to His Decree, in our sayings and manners. The peace of mind that this brings to a believer’s heart creates room for guidance from Allah, as He (The most Exalted) says :

“No calamity befalls, except by the leave of Allah, and whosoever believes in Allah, He guides his heart” [At-Taghaabun 64:11]. 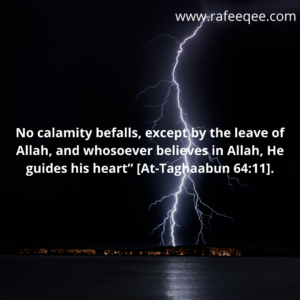 Interpreting this verse, scholars say it depicts a man to whom calamity happens, but he knows that it is from Allah, so he accepts it and submits.

Scholars analyze, the word ‘if’ or ‘if only’ using these two approaches:

a. To express grief for the past and distress of what has been decreed by Allah. This is prohibited (haram) as discussed above.

b. When the word ‘if’ is used to convey beneficial knowledge or to express love for goodness, such as the word of Allah in the below verse:

“Had there been therein (in the heavens and the earth) aalihah (gods) besides Allah, then verily, both would have been ruined” [Al-Anbiyaa 21:22]

Or you are saying, “If only I had what so and so has, I would do what he does”

This kind of statement is permissible. The hadeeth of the prophet ﷺ , “If only he [Moosa] had had patience, so that Allah would have told us more of what happened between them” and the likes.

“Allah is the Creator of all things, and He is the Wakeel (Trustee, Disposer of affairs, Guardian) over all things” [Az-Zumar 39:62]