Seeking knowledge and applying it has been the bedrock of scholarship and leadership throug out Islamic history. All the prophets of Allah, the rightly guided caliphates and other leaders that came after them benefitted the ummah with their knowledge and practice of the Deen. However, like an elephant in the room, our Ummah has been facing a demise of beneficial knowledge; THE FITNAH OF OUR TIME.

Although any sound Muslim can call to the path of Islam (do dawah), but that does not necessarily make them scholars. Islamic scholarship has etiquettes which lots are never qualified except they go through the process, which starts with SEEKING AUTHENTIC KNOWLEDGE. The benefit of knowledge is immense. Apart from being the essence of the first qur’anic revelation to the best of mankind, it is the legacy of all the prophets! In the noble Qur’aan, Allah attests that those who fear him the most are the knowledgeable scholars;

Knowledge can elevate the status of the poor and demote the rich.

On the other hand, ignorance is the absence of knowledge and the attitude to attain it. The greatest enemy of Islam is the ignorant Muslim because his actions destroy the true nature of Islam. This fitnah of our time perpetrates and seems to be a turmoil that cannot be eradicated. Just as in every community where the threat is not always the outsider, but the ignorant insider, so is the issue of fake scholarly identity a threat to our Ummah. These people do not only display their ignorance within themselves, but they also make it hard for sincere quest of knowledge; thus, the degradation of authenticity has made the strive for true acquisition of knowledge difficult, because it is common to see half-baked or simply unlettered leaders sitting on the chairs of scholars and making dawah, hence we see callers thinking they are scholars.

For a Muslim with a healthy faith, striving away from ignorance is compulsory. Prophet Musa sought the protection of Allah from ignorance, saying

Islam is a religion that is based on knowledge, so how can ignorance have a place in it?

How can you give what you do not have?

Knowledge should be sought from its people. Allah says in the noble Qur’aan

Seeking knowledge from wrong sources is amounting to placing a round peg in a square hole! According to Al-Imam Ashaatibi said “Evil and misguided scholars are those who are dangerous to mankind. They are a disease to mankind” Apart from this threat (fitnah) being because of arrogance, of which Allah warns the Muslims from imitating Shaytan: Among some of the negative consequences of following mediocre and knowledge deficient scholars are the following:

(1) Misguidance: Lost and evil scholars are far from the guidance of Allah and are part of the wrongdoers. They are either ignorant of what is in the books or simply fail to act on it. Describing them, Allah says

“The likeness of those who were entrusted with the Tawrah (Torah), but who subsequently failed in those (obligations, did not carry it), is as the likeness of a donkey who carries huge burdens of books. How bad is the example (or the likeness) of people who deny the Ayat (Verses) of Allah. And Allah guides not the people who are Zalimun (wrongdoers).” [Al-Jumu’ah 62:5].

With their confusion, they mislead their followers. 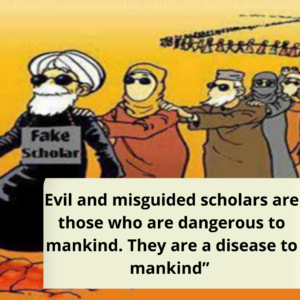 (2) Self destruction: A person can ruin himself because of ignorance. The son of prophet Nu’h was drowned by the water waves sent by Allah as a torture to them. When his father warned him of the impending torment, he replied:

(3) Innovation (Al-Bid’ah) : Because of their limited knowledge, ignorant scholars tend to either read books that only suit their desires or have poor understanding of the right books. This is usually why they fall into Bid’ah and other major sins. The prophet (peace be upon him) said in one tradition

“And every innovation is going astray, and every going astray is in the Fire.” [An-nasai:1578] 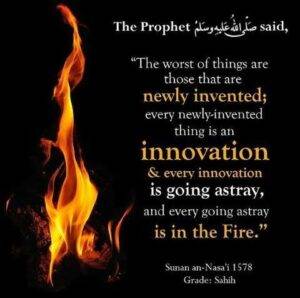 (4) Sign of the last hour: One of the minor signs of the hour is the decline knowledge and spread of ignorance. According to a hadith

“Among the signs of the last hour: knowledge will decline, ignorance will prevail, zina will be widespread (Agreed Upon) 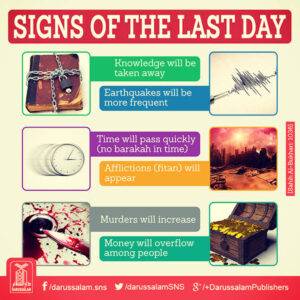 (5) Loss of dignity: When ignorance is displayed among the knowledgeable, it portrays a negative image of the ignorant and damages his/her integrity. A Muslim is expected to live with modesty and dignity. Therefore, seeking beneficial knowledge, preaching it, and acting by it is a sure way of earning respect in any community. A Muslim is expected to strive to attain excellence in everything, especially when it comes to seeking knowledge of the Deen towards Pleasing Allah

(6) Apostasy: A person who talks out of his heart desire without knowledge may commit certain sins unknowingly, which may send him/her out of the fold of Islam.

(7) Societal instability: Lack of knowledge especially in the leaders can lead to destabilization and provocation in the society when peoples’ rights are wrongly assigned, or human and religious rights are abused. It will foster sectarianism and hence the ummah will be divided and weak. A leader should be vast in knowledge to maintain unity in the society. 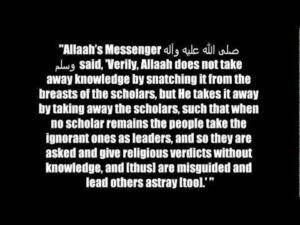 WAYS TO PROTECT ONESELF FROM IGNORANCE
1. Seeking beneficiary knowledge and practicing it
2. Pondering on the verse of Allah and his signs
3. Sitting with people of knowledge
4. Avoiding & abandoning ignorant people to make them change their ways.
The one who seeks knowledge without applying it was compared to dog and donkey in the Quran, to reflect how Allah frowns at the ignorant people. Ignorance has no place in Islam. A Muslim must strive to seek knowledge and practice what he learns. The essence of knowledge is to take ACTIONS after acquiring it, because knowledge without action has no VALUE. we should all strive to eradicate this disease from our families to build a healthy and strong communities, maybe we can make a difference in cleansing our Ummah of the filth that keeps propagating, In Sha Allah!

Find this beneficial, please share with a friend, may Allah bless and preserve our knowledge upon khayr.