Humans are natural created with insatiable needs. As some feel the need to get richer, others wants peace of mind, happiness, or freedom from worries and anxiety. While all these are necessary for every human, it is not certain that everyone will attain the desired goals.
What then is expected of one who believes in the uncertainty of life, and the inequalities of needs and status. A sincere believer who has a degree of faith in his heart, or how can one achieve contentment despite the insatiable needs of human. Having a firm trust that what is yours cannot miss you by Allaah’s Mercy requires religious, natural, and practical means. No one can feel at ease despite his needs these except the believers; although other people may achieve some of their needs, but the reality of life is that they will miss out on others, except those whom Allaah has blessed with a content heart.

The secret answer and hidden treasure to to a happy life is ‘CONTENTMENT’ . Having contentment with what Allaah has divided, and the satisfaction of what He has decreed, is one of the great and bountiful blessings that Allaah bestowed upon the successful believers, with a healthy hearts and peaceful souls! Contentment comes when you appreciate what you have and don’t compare it to what others have. Obviously, the prophet ﷺ has confirmed such believers in one of his narrations.

The Messenger of Allah, ﷺ said: ““He has succeeded who embraces Islam, whose provision is sufficient, and whom Allaah has made content with what he has given him.” [Ṣaḥīḥ Muslim 1054]

The word “contentment” is the state of being happy and satisfied. Islam emphasizes that the believer be contented with what he has that is, the believer is satisfied with what Allaah has divided and given him of the blessings; of health and well-being, money, housing, and wife, etc.., and he sees that he is better than all Allah’s creation, and that he always keeps his tongue with remembering and thanking the ultimate Provider, saying: “Praise be to Allaah, who preferred me over many of his believing servants. And not disdainful of fate or ungrateful of Allah’s favor and chastisement, or to see that he deserves more than that, thereby falling in the kinds of people mentioned by Allaah in [Surah al-Fajr, Q89:15-16]

“And as for man, when his Lord tries him and [thus] is generous to him and favors him, he says, “My Lord has honored me.”

But when He tries him and restricts his provision, he says, “My Lord has humiliated me.”

Consider the life of the best of mankind and our role model ever, Muhammad ﷺ how was his life subsistence and livelihood! it was simple with total contentment, and did not look at those around them of the nations, such as Romans, or Persians, and what lavished upon them of the blessings and luxurious living, Because he knows that the true richness is the richness of the soul, the happiness of the heart, the safety of the chest, and the tranquility of the mind. Abubakar [may Allaah be pleased with him] once asked ‘Aishah [may Allaah be pleased with her] about the life of the messenger of Allah ﷺ and she mentioned that the Crescent upon Crescent pass on the House of the messenger of Allah, there would be no fire [cooking], and their food would be [only] two black; dates and water، And our Holy Prophet ﷺ was sleeping on a mat until it affects his side, Instead, he still rise at night until his feet are broken, and he ﷺ says, ” Shall I not be a grateful servant [of Allaah]?”!

When a believer realizes that he has no control or power over the blow of fate set by Allaah [the most Exalted], then he would [only] recourse to submit to the divine decree and strive to actualize a state of total contentment.

The Messenger of Allah, ﷺ said:

“Whoever is concerned about the world, Allah will disorder his affairs, make poverty appear before his eyes, he will not get anything from the world but what has been decreed for him. Whoever is concerned about the Hereafter, Allah will settle his affairs, make him content in his heart, the world will come to him although he is reluctant for it.” Source: [Sunan Ibn Mājah 4105] 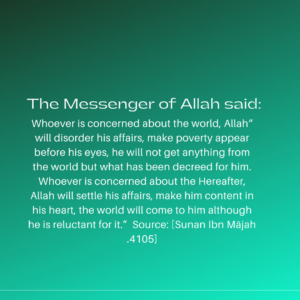 This means, Allaah will take care of the affairs of those who rely upon Him.

Contentment endows the sincere believer with good effects and great advantages, by which he dispenses with the wrecked of the whole world and compensates with Eemaan [faith] for its adornment.

Allaah says: “Whatever you have will end, but what Allah has is lasting. And We will surely give those who were patient their reward according to the best of what they used to do.”

Among those effects are as follows

“Look at those below you and do not look at those above you, for it is the best way not to belittle the favors of Allah.” Source: Ṣaḥīḥ al-Bukhārī 6490, Ṣaḥīḥ Muslim 2963

 It is a key to freedom

Ibn al-Qayyim reported: Ibrahim ibn Shayban, may Allah have mercy on him, said, “Dignity is in humility, honor is in righteousness, and freedom is in contentment.” Source: Madārij al-Sālikīn 2/314

 There is no treasure richer than contentment, It is itself richness

Ibn Qutaybah reported: Sa’d ibn Abi Waqqas, may Allah be pleased with him, said to his son Umar, “O my son, when you seek richness, seek it in contentment. For if you are not content, wealth will never enrich you. Source: ‘Uyūn al-Akhbār 3/207

How beautiful is the saying of al-Shafi’i, may Allaah have mercy on him, when he says:

“I know that contentment is the core of richness , and I adhered to it , so I never stood at anybody’s door , or begged anyone. Consequently , I became rich without a dirham, passing by people as if I were a king.”

 It brings about tranquility to the soul

Contentment is a marker of happiness, richness , and peace of mind.

The Messenger of Allah, ﷺ said: “Wealth is not in having many possessions. Rather, true wealth is the richness of the soul.” 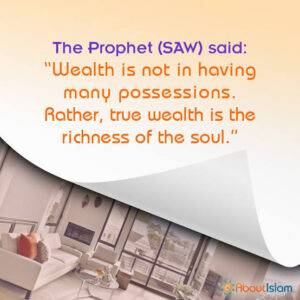 Allaah’s Messenger, ﷺ said: “Whatever I have of good I will never withhold from you, but whoever refrains from asking (of people), Allaah will make him content, whoever seeks to be independent of means, Allaah will make him independent, and whoever strives to be patient Allaah will bestow patience upon him, and no one is ever given anything better and more abundant than patience.” [al-Bukhārī (1469) and Muslim (1053)].

An-Nawawi (may Allah have mercy on him) said:

In this hadith we are encouraged to refrain from asking of people and to be content with what is available, so as to preserve one’s dignity, even if what is available is little. [source: Sharh Muslim (7/126)]

 It is sunnah & rewarding by making the du’a’ for contentment

The Messenger of Allah, ﷺ used to pray to Allaah saying:

“O Allah make me content with what you have provided me, send blessings for me therein, and replace for me every absent thing with something better. [al-Bukhārī/ adab al-Mufrad]

In another narration, He ﷺ pray to Allaah: “I ask you to grant me contentment after You decree my destiny.” (Al-Tabarani)

 It serves as a safety from diseases. such as anxiety, obsessive-compulsive disorder, depression, anger, etc…

Allaah says: “Whoever works righteousness — whether male or female — while he (or she) is a true believer- verily, to him We will give a good life (in this world with respect, contentment and lawful provision), and We shall pay them certainly a reward in proportion to the best of what they used to do (i.e. Paradise in the Hereafter).” [Surah An Nahl , Q16:97] 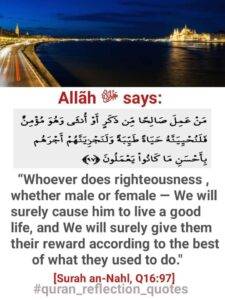 HOW TO OBTAIN CONTENTMENT

• Being reliance, conviction, and trust in Allaah:

Trust and relying upon the Almighty Allaah knowing that your provision (rizq) will certainly come to you.

Allaah says: “And whoever relies upon Allah – then He is sufficient for him. Indeed, Allah will accomplish His purpose. Allah has already set for everything a [decreed] extent.” [Surah At-Talaaq, Q65:3]

Allah’s Messenger of Allah, ﷺ said: “If you were to rely upon Allah with reliance due to Him, He would provide for you just as He provides for the birds. They go out in the morning with empty stomachs and return full.” Source: [Sunan al-Tirmidhī 2344]

• Realizing that the key to happiness is in contentment and this life is merely temporary and vanity. Allaah says

“Whatever things you have been given for the life of this world are merely [temporary] gratification and vanity: that which is with Allaah is better and more lasting– will you not use your reason?” [Al-Qasas, Q8:60].

• Being pleased with Allah’s decree {will} and always remember this statement in the noble Qur’aan: “Indeed, your Lord is the Doer of what He wills”. [Q11:107].

By this you are contented and at the same time accepting the divine decree of the Most Exalted that is one of the fundamental pillars of Faith.

• Being kind to others, avoiding comparisons or envious acts.

Here a true believer knows that sustenance is divided, and the term is inevitable And there is no creature on earth but that upon Allah is its provision, and He knows its place of dwelling and place of storage. All is in a clear register. [Surah Hud, Q11:6].

• Being thankful and seeking the pleasure of Allaah (the Most Exalted), “And [remember] when your Lord proclaimed, ‘If you are grateful, I will surely increase you [in favor]; but if you deny, indeed, My punishment is severe.” [Ibrahim,7].

“O You who believe! Eat of the good things that We have provided for you, and be grateful to Allaah , if it is Him you worship.” [Al-Baqarah ,172].

• Finally, The content [believer] follows the Prophet ﷺ who epitomizes contentment and sets an excellence example for all Muslims. Allaah says:

“There has certainly been for you in the Messenger of Allah an excellent pattern for anyone whose hope is in Allah and the Last Day and [who] remembers Allah often.” [[Al-Ahzab, Q33:21]]

In this ever evolving life, the best and most noble fulfillment is the gift of contentment, and whomsoever Allaah has blessed with a content heart, such are indeed the healthy ones. We pray that Allaah subhanahu wa Taalla grant us contentment and purification. May Allaah take care of your worldly affairs, and reward your efforts with success in hereafter.