The Wonders In The Affairs Of Believers

When we look at our lives or the stories of people from the past, it seems to be that problems never seem to stop. The trials and tribulations make it appears that the affairs of true believers are not free from upheavals hence there is a need to anticipate, and in fact prepare for such problems!

But what wonder is there to look forward to?

Many questions have been raised about why the Almighty inflicts his creation with challenges. Fortunately, the Qur’an has provided the answers to the above question. In one verse, He says:

“Do people think once they say, We believe that they will be left without being put to the test”  [Al-Ankabuut 29:2] 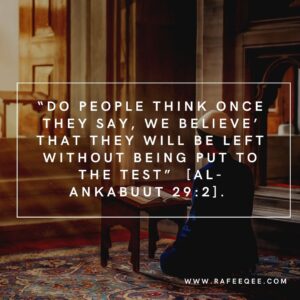 Responding in another verse, Allah affirms that believers will be tested with fear, hunger, loss of wealth. Looking at the biography of the Holy Prophet Muhammad and other messengers, one cannot but wonder why most of these past heroes went through many challenges despite their position in the religion of Islam. Some of them received the “certificate of paradise” before death while Allah himself confirmed that He has granted His pleasure to others in His holy book. For some, their past and future sins have been forgiven, yet they were not spared from life tribulations. Therefore, we can agree that there is a wonder in the affairs of believers.

Interestingly, believers have been admonished to act as role models and lead every situation they find themselves in with optimism and positivity. A true Muslim is one that never despairs and loses hope in His creator, irrespective of the situation he finds himself.

Whenever a person is afflicted with difficulty,  there are ways to view and appreciate the wonders. The Messenger ﷺ of Allah has revealed what Islam expects from such a person, saying: “How wonderful is the affair of the believer, for his affairs are all good, and this applies to no one but the believer. If something good happens to him, he is thankful for it and that is good for him. If something bad happens to him, he bears it with patience and that is good for him”[Muslim].  So, as a believer, if calamity befalls you, never blame people or think ill of others but simply say: ‘’Innaa Lillaahi wa innaa ilayhi raaji’uun (Verily, to Allah we belong and unto Him is our return). This is a great statement that not only earns forgiveness for those who say it but also guides them. 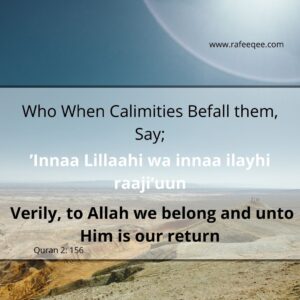 Many other benefits of staying patient at trying times have been mentioned in several texts. The prophet said in another tradition:

“No believer is pricked by a thorn or more, but that Allah will raise him one degree in status or erase a sin.” [Agreed Upon]. 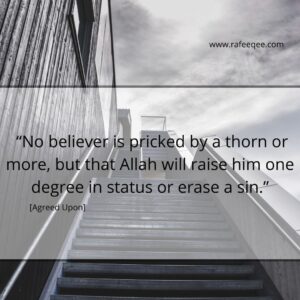 Ibn Al-Qayyim, one of the greatest scholars in Islam mentioned in his book Zaadul Ma’aad’ some ways by which believers stricken with calamity can ease the hardship

Allah says, “oh you who have believed,  seek help through patience and solah, indeed Allah is with the patient” [ Surah Baqarah:153] 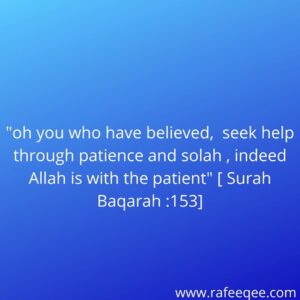 This is the wonder in the affairs of believers. These believers are those whom Allah describes in the verse above. They are those who are aware that this life is ephemeral and full of tests and trials. Tribulation could come in form of goodness or affliction, but he should strive to remain steadfast and never despair. They ponder on the history of the past heroes of Islam and what befell them because of their faith. They are those whose aim is a success, and we hope that we are among them, biidnilLaAh.

May Allah hold us firm on the deen of Islam and make our faith strong in face of challenges in order to enjoy the promises he has made for his patient slaves.