Have you ever thought that your sins might not be forgiven by Allah? Or you belong to the category of people who don’t have confidence in their relationship with Allah?

If your answer is yes, then you may be doing yourself more harm than good because Allah is a Merciful Lord. Having a positive attitude towards Allah is one of the greatest treasures that the believers have but are not aware of. The prophets and messengers of Allah never doubted their lord even in the face of enormous challenges. They spoke and reacted to many situations with courage and confidence, knowing that Allah never fails in delivering his promises to his pious slaves. Prophet Saalih (Peace be upon him) told the people of thamuud

In other extreme situations, doubters asked for the “impossibles’’ to destroy the dawah of the heroes of Islam. Alas, they were met by strange optimism and confidence that truly, Allah is always with his beloved ones. Prophet Isa was asked by his people to bring down a meal table from the sky before they could believe his message. He confidently asked Allah and immediately a feast-ready table descended from the sky! saying

Having a good thought of Allah or thinking positively of Him for a faithful Muslim is a certain way of receiving only good from Him, believing that He bestows on his slaves only what is good, in the best of ways and at the appropriate time. Allah says, “I am as My servant thinks I am” (Agreed Upon)

In another narration, The Messenger of Allah, ﷺ said,

Although good thinking towards Allah should be practised in all spheres of our lives, below are critical instances where a Muslim is expected to 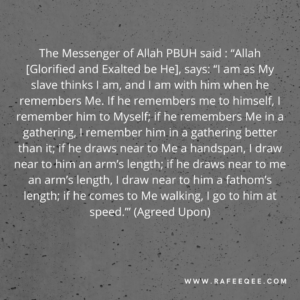 1. WHEN DOING ACTS OF OBEDIENCE The Messenger of Allah, ﷺ said: “Allah [Glorified and Exalted be He], says: ‘‘I am as My slave thinks I am, and I am with him when he remembers Me. If he remembers me to himself, I remember him to Myself; if he remembers Me in a gathering, I remember him in a gathering better than it; if he draws near to Me a handspan, I draw near to him an arm’s length; if he draws near to me an arm’s length, I draw near to him a fathom’s length; if he comes to Me walking, I go to him at speed.’” (Agreed Upon)

We should note that in this hadith, the connection between thinking positively of Allah and doing righteous deeds is very clear, and it is followed by encouragement to remember Allah and to draw close to Him by doing acts of obedience. So, whoever thinks positively of his Lord that will motivate him to do good deeds. Al-Hasan al-Basri (May Allah have mercy on him) said:

2. DURING ADVERSITY AND CALAMITY: A great example of having a good thought of Allah during hardship is the story of the three people who were shut in the cave, no one to rescue them but with their sincere hope and good thought of Allah, they asked Allah for help by virtue of their righteous deeds, and each of them said in his du’a :“O Allah, if You know that I did that seeking Your countenance, then grant us relief”, and Allah answered their prayer.

In one narration, Jaabir( May Allah be pleased with him) said: “I heard the Messenger of Allah, ﷺ said:

“No one of you should die except thinking positively of Allah” (Muslim).

5. DURING SUPPLICATION (DU’A): The Messenger of Allah, peace and blessings be upon him, said,

“Call upon Allah with certainty that He will answer you. Know that Allah will not answer the supplication of a heart that is unmindful and distracted.” [At-Tirmidhī]. 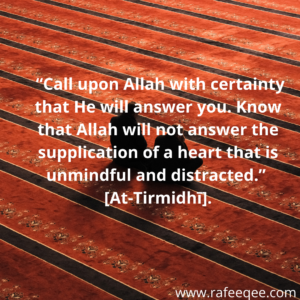 There is no better way to get yourself motivated in this life of distractions except in the remembrance of Allah. Thinking good about Ar-Rahman will lighten your heart, and you would In shaa Allah find tranquility despite the chaos happening around, it is the greatest treasure a person can have.

May Allah keep you happy, and increase you in goodness.